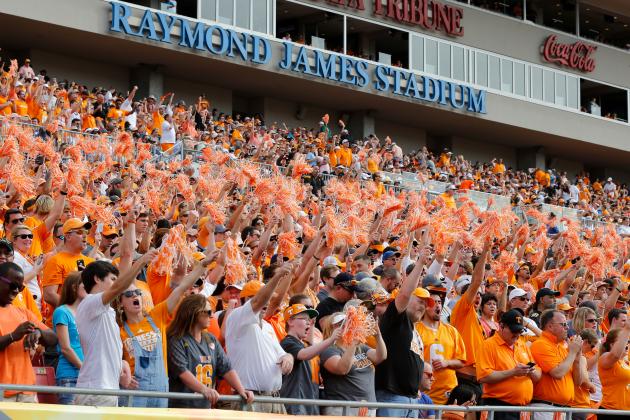 Mike Carlson/Getty Images
Tennessee’s orange-clad supporters were thrilled with the Vols’ 2016 rout of Northwestern in the Outback Bowl.

The Outback Bowl is not the “Granddaddy of Them All” and will never be confused with the Rose Bowl.

The inaugural edition of this game took place in December of 1986. It subsequently moved to New Year’s Day in 1988. But from the beginning, the bowl has become one of the staples of the college football bowl season.

This early starter on New Year’s Day in Tampa, Florida, has featured many exciting games and fantastic finishes. We look at the Top 10 moments in Outback Bowl history.

Prior to this game, South Carolina “Ol’ Ball Coach” Steve Spurrier said his team would use two quarterbacks as it attempted to overcome Michigan.

While the dual-quarterback scenario is often an indication that neither quarterback is good enough to win, that was not the case in this game. Instead, Dylan Thompson and Connor Shaw helped the Gamecocks outlast the Wolverines in a competitive game.

Thompson helped secure the victory when he connected with Bruce Ellington on a 32-yard TD pass for the game-winning strike in the final minute.

In addition to that game-clinching touchdown, South Carolina defensive end Jadeveon Clowney also put his signature on this game. His huge hit on Michigan’s Vincent Smith in the fourth quarter resulted in a fumble and the Wolverine losing his helmet from the force of the blow.

A quick look at this game reveals something unusual. Both teams are from north of the Mason-Dixon line.

The 1992 Outback Bowl between Syracuse and Ohio State marked the only time in the bowl game’s history that it did not include a southern school.

The Orange used the big play to build a 14-0 lead. Wide receiver Qadry Ismail proved to be difficult for the Buckeyes to cover.

However, Ohio State eventually tied the game at 17-17 when Steve Tovar blocked a punt that teammate Tito Paul recovered in the end zone.

Syracuse quarterback Marvin Graves would not let the Buckeyes steal his thunder. He hit wideout Antonio Johnson with a 60-yard TD pass in the fourth quarter that proved to be the game-winner.

Florida showed off its power on offense, defense and special teams in beating the Iowa Hawkeyes.

Quarterback Chris Leak threw for 277 yards and two touchdowns passes in helping the Gators build a big first-half lead. The Gators also scored on a 60-yard interception return for a touchdown by Vernell Brown. Later, Tremaine McCollum ran six yards with a blocked punt to help the Gators build a 24-7 halftime lead.

Iowa quarterback Drew Tate rallied his team by throwing for 346 yards and three touchdowns. But the Gators hung on for their their exciting and high-scoring victory.

Michigan and Alabama met for the first time in their histories. The result was a classic game that featured two of the best running backs in the country in Michigan’s Jamie Morris and Alabama’s Bobby Humphrey.

Michigan and Morris dominated the early going by building a 21-3. Humphrey and the Crimson Tide roared back with 21 straight points to take a 24-21 lead.

But Michigan quarterback Demetrius Brown found wideout John Kolesar in the corner of the end zone with 50 seconds remaining to give the Wolverines the thrilling victory.

Nine years after the first meeting between these two college football powerhouses, they got together for the second time in the Outback Bowl.

This was a more defensive-oriented game than the first meeting. Michigan quarterback Brian Griese led his team into Alabama territory on several occasions, but the Alabama defense regularly came up with key stops.

Late in the third quarter, Alabama linebacker Dwayne Rudd intercepted Griese’s deep pass and returned it 88 yards for the go-ahead touchdown. Shortly after that, running back Shaun Alexander gave the Crimson Tide some insurance with a 46-yard touchdown run.

Michigan hearts were broken in the loss. But the Wolverines went on to an undefeated season and a share of the national championship the following year.

Melvin Gordon and the Wisconsin Badgers were not to be denied when they met the Auburn Tigers in the 2015 Outback Bowl.

Gordon and the Badgers were coming off a humbling 59-0 defeat to Ohio State in the Big Ten Championship Game. They wanted to rid themselves from the stench of that game.

The Badgers and the Tigers engaged in a riveting game, and Gordon was the headline performer as he rushed for 251 yards and three touchdowns.

The performance gave Gordon a rushing total of 2,587 yards for the season. It was the second-best in NCAA history behind Barry Sanders, who gained 2,628 yards for Oklahoma State in 1988.

The Badgers secured the win when Rafael Gaglianone kicked the winning field goal on the opening possession of overtime.

Northwestern was desperately trying to break its six-game postseason bowl drought. Coach Pat Fitzgerald was not about to let an opportunity to go for the win pass him by.

The Wildcats trailed by three points in overtime. Fitzgerald sent placekicker Steve Flaherty onto the field for what looked like a game-tying field goal.

Flaherty, who had the assignment because regular PK Stefan Demos was injured, did not attempt the kick. Instead, Fitzgerald went for the win with a fumblerooski.

Wideout Zeke Markshausen took the ball from between the legs of holder Dan Persa. Markshausen attempted to sweep around the right end for the game-winning touchdown. Auburn’s Neiko Thorpe tackled him after a 3-yard gain to the two-yard-line.

The first chapter in the history of this bowl was a thrilling game between Boston College and Georgia that came down to the final seconds.

The Tampa area had been trying to get a bowl game for years, and it received the Hall of Fame Game. The bowl eventually became the Outback Bowl when the restaurant came in as the title sponsor.

The Eagles took a 20-7 lead into the locker room at halftime. But the Bulldogs surged in the second half and took a fourth quarter lead when quarterback James Jackson scored his second touchdown of the game.

It looked like Georgia’s 24-20 lead might hold up. However, quarterback Shawn Halloran connected with Kelvin Martin in the end zone with 32 seconds left to give the Eagles the memorable win.

This game turned out to be a classic that featured Drew Brees, who would go on to become one of the most prolific quarterbacks in NFL history.

Brees also was a brilliant college quarterback for the Boilermakers. He appeared to have his team on its way to an easy win when Purdue broke out to a 25-0 lead.

However, quarterback Quincy Carter and the Georgia Bulldogs were not about to accept that fate. Terrence Edwards scored on a 74-yard run, and Georgia added a field goal to get within 25-10 at halftime.

The Dawgs continued to chip away in the second half. Randy McMichael hauled in the game-tying TD pass with 1:19 remaining in the fourth quarter in the corner of the end zone.

Hap Hines provided the decisive points when he connected on a 19-yard field goal to give Georgia the greatest comeback in bowl history at the time.

Brees threw for an Outback Bowl record 378 yards in the loss.

He knew that head coach Mark Dantonio had lost his first four postseason games with Michigan State. There was work to do if the Spartans going to keep that streak from growing to five games.

With Michigan State trailing 27-20 late in the fourth quarter, Cousins led his team on a 10-play, 85-yard drive that culminated with running back Le’Veon Bell’s second touchdown of the game.

Dan Conroy won the game for the Spartans with a 28-yard field goal in the third overtime.

“And at halftime we had our doubts because of how successful their defense was in stopping us. … But we found a way. It wasn’t perfect, but we certainly showed character, and that’s what I’m most proud of,” Cousins said to reporters after the game (h/t OutbackBowl.com). “We played with a great deal of maturity and toughness, and we weren’t afraid. We didn’t back down, and we found a way at the end. And that’s what great teams do.”