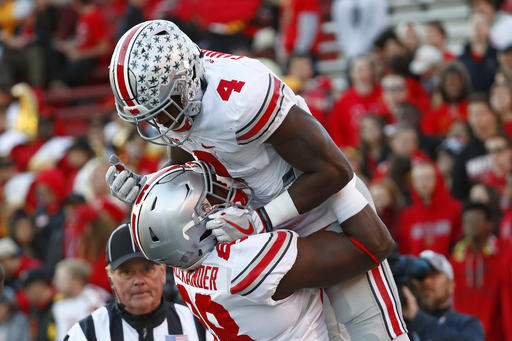 The Ohio State Buckeyes got hot early and ran away with a 62-3 victory over the Maryland Terrapins on Saturday. Quarterback J.T. Barrett and the offense looked crisp, racking up over 500 total yards in the rout.

The Ohio State defense forced two turnovers and has now given up just six points in its last two games. In those last two contests, the Buckeyes are outscoring opponents 124-6.

Here are the game grades for the Buckeyes.

The Buckeyes dominated in the run game from the opening kickoff against Maryland, amassing over 220 yards on the ground.

Mike Weber finished with just under 100 yards for the game, tallying 93 yards on 12 carries in one half of work. Curtis Samuel had 38 yards and two touchdowns on just four carries, and true freshman Demario McCall saw most of the second-half carries. Barrett showed why he is one of the most versatile quarterbacks in the nation with two rushing touchdowns.

The questions about Ohio State’s passing offense that were answered last week attained further explanation against Maryland. The Buckeyes looked crisp through the air, as Barrett had 253 yards passing and two touchdowns in a little more than two quarters of action.

Samuel led the receiving corps yet again with five catches for 74 yards and a touchdown. Nine different Buckeyes caught passes, including true freshman Binjimen Victor, who caught his first career touchdown in the fourth quarter.

Maryland had five rushing yards at halftime. The front seven did not allow the Terps to get anything going on the ground, resulting in Maryland only having 45 total rushing yards. The linebackers were filling holes well and with speed, which is something the Buckeyes will need in the next two weeks against the two teams from Michigan.

Maryland had just 133 yards passing between three quarterbacks. Starter Perry Hills left the game in the first quarter after sustaining an injury. Backup Caleb Rowe threw for 93 yards and tossed a bad interception to Marshon Lattimore.

Ohio State’s pass rush was effective, forcing Maryland to throw the ball away often. The Buckeyes also had three sacks of Maryland’s trio of quarterbacks.

Tyler Durbin continues to be an impressive walk-on for the Buckeyes. He made all eight of his extra points and knocked in two field goals, including a career-long 45-yarder in the first half.

After two consecutive blowout wins, the Buckeyes will find themselves in a revenge spot, heading to East Lansing to avenge their lone loss of the season in 2015. While it has had a disappointing 2016, Michigan State is normally a tricky game for the Buckeyes, regardless of record.

How do you think the Buckeyes looked against Maryland? Drop your thoughts in the comment section below.