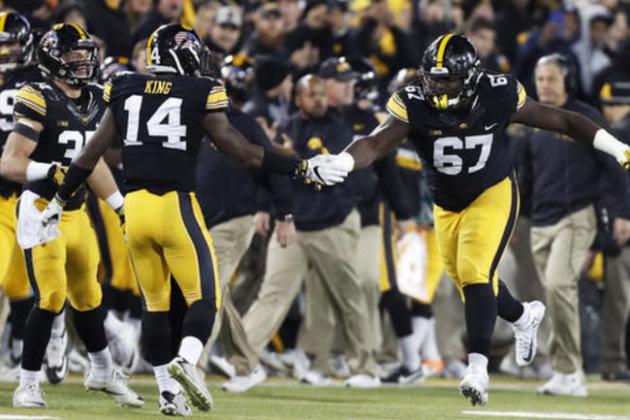 Special teams are often the most overlooked units in football. On Saturday night, the Iowa Hawkeyes rode their special teams unit to a shocking 14-13 upset against the No. 3 Michigan Wolverines.

Keith Duncan hit a 33-yard field goal as time expired to make Michigan the third Top Four team to lose Saturday, joining the No. 2 Clemson Tigers and No. 4 Washington Huskies and leaving the race for the College Football Playoff wide open.

Ryen Russillo of ESPN aptly summed up the playoff picture heading into next week:

I don't know if there is a CFB Playoff Committee top 4 this week that I could get really upset about. Everyone is still alive.

If Michigan isn’t in the Top Four, it will have its offense to blame. The Wolverines managed just 201 yards from scrimmage and turned the ball over twice. Quarterback Wilton Speight completed just 11 of 26 passes for 103 yards with an interception, while Chris Evans led the way on the ground with 52 yards.

Akrum Wadley was the star for Iowa’s offense, accumulating 167 yards from scrimmage and a score. But the special teams units stole the show.

Iowa punter Ron Coluzzi pulled down the ball to avoid the Michigan rush but stumbled and fell well short of the line of scrimmage in the first quarter. The Wolverines went just 23 yards in 10 plays, however, setting up Kenny Allen’s 26-yard field goal to open the scoring.

Iowa’s punting unit was again the center of attention on the Hawkeyes’ next drive.

This time, the Wolverines were called for two straight running-into-the-kicker penalties, giving Iowa a first down. The Hawkeyes proceeded to drive into Michigan territory, but Miguel Recinos’ 46-yard field-goal attempt was no good.

Michigan then built on its lead, going 72 yards in nine plays on the ensuing drive, which culminated in Ty Isaac’s seven-yard touchdown run.

But while Michigan’s defense continued to stymie the Hawkeyes, the offense gave up Iowa’s first points.

A brilliant punt by Coluzzi left the Wolverines buried at their 2-yard line, and De’Veon Smith was tackled in the end zone two plays later, giving Iowa a safety and trimming the deficit to 10-2.

The Hawkeyes marched to the Michigan 3-yard line two possessions later, though the Wolverines forced them into a 4th-and-goal. Iowa went for the touchdown, and C.J. Beathard found Wadley for a three-yard score.

The Hawkeyes went for two to tie, but a dropped pass in the end zone kept the score at 10-8 as the teams went into halftime.

Iowa’s defense did its job, holding Michigan to just 124 first-half yards, the lowest total in a half for the Wolverines this season, per ESPN Stats & Info.

Color me shocked … shocked … that Michigan is having a tougher time of it by playing a real road game.

If special teams were the story of the first half, they immediately re-entered the narrative to start the third quarter.

Michigan’s Khalid Hill took the opening kickoff but fumbled on the return, setting up Iowa on the Wolverines’ 43-yard line. B/R’s Adam Kramer summed up Iowa’s performance up to that point:

Iowa is going to cut Michigan to death with a spoon.

The spoon appeared to have a serrated edge, however, as the Hawkeyes converted a 4th-and-1 and drove downfield, eventually settling for a field goal and an 11-10 lead.

Dan Wolken of USA Today wasn’t surprised to see Iowa rise to the occasion against the Wolverines:

There was zero doubt in my mind Iowa would play its best game of the year tonight.

For Michigan, Allen’s 51-yard field goal looked as though it might be the winning kick. But Iowa had other ideas.

The Hawkeyes got the ball back on the Michigan 36-yard line with 1:23 remaining, driving 21 yards in five plays to set up Duncan’s game-winning field goal.

“I”m really proud of them; I’m so happy for them,” Iowa head coach Kirk Ferentz said of his team after the game, per the ABC broadcast. “You know, last week we just got kicked right in the teeth, and that’s not much fun. But we lived through it, and the guys did a good job all week, and we obviously competed tonight.”

Wadley, who carried the offense, also chimed in after the game.

He added: “Hats off to our defense. They held off a great Michigan offense and all we needed to do was score.”

Iowa still has games against Illinois and Nebraska remaining, but the team is now bowl-eligible, taking away some of the pressure from those matchups.

For Michigan, everything is up in the air. Indiana and Ohio State still remain on the schedule, with the latter contest to decide the Big Ten East. If Michigan wins out, it’ll still reach the Big Ten title game and its College Football Playoff hopes will live on.

In other words—and with the sort of irony that only college football can provide—Michigan’s loss may have been worse for Ohio State than it was for the Wolverines.

Michigan still controls its destiny. Ohio State does not. And after Saturday, the sport is left reeling.