Michigan vs. Iowa: Game Grades, Analysis for the Wolverines 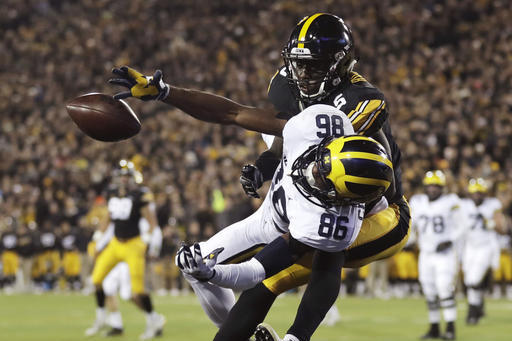 After coming into the game favored by 24 points, according to Odds Shark, most figured the Michigan Wolverines would comfortably take care of business and move to 10-0 on the season. However, the Iowa Hawkeyes had different plans.

Thanks to a raucous Kinnick Stadium crowd and a lack of big plays out of the offense, Michigan dropped its first game of the season, 14-13, on a game-winning field goal from Iowa’s kicker, Keith Duncan.

Check out my game grades and analysis.

Everyone started hyping up Wilton Speight, including myself, as a true star at the quarterback position for Michigan. But he didn’t live up to the hype Saturday night.

The big junior signal-caller finished the game 11-of-26 for just 103 passing yards and one interception. It’s easily the worst game of Speight’s young career and one he will need to get over quickly, as the Indiana Hoosiers come to town next weekend.

As for the receivers, outside of Jake Butt, it was bad.

Jehu Chesson and Amara Darboh both struggled throughout the game, drops being a big problem. Chesson finished the game with two catches for 30 yards, while Darboh ended the game with just one catch for five yards. That’s not the type of play-calling Michigan and Speight needed.

Though Michigan’s passing offense was stalled all game long, its passing defense was on point. Iowa’s C.J. Beathard finished the game just 8-of-19 for 66 yards passing, one touchdown and one interception. And it was thanks to both of the Wolverines’ defensive backfields and defensive lines.

Jourdan Lewis and Channing Stribling locked down the defensive backfield while Taco Charlton and Chris Wormley were wreaking havoc on the Hawkeyes’ passing game.

It was a great but wasted performance from the Michigan defense.

Finishing a game with only 98 yards rushing in total, you’d expect an “F” for the running offense. However, I’m not putting full blame on the players here, as the staff looked to pull away from the run game and elected for the passing game in the second half.

De’Veon Smith led the team with 12 carries but only finished with 28 yards total. Chris Evans was the biggest threat on the ground but only saw eight carries for 52 yards. As for the other backs, Ty Isaac and Karan Higdon hardly saw any touches.

The lack of carriers for Evans was the biggest head-scratcher, as his speed and cutting ability allowed him to pick up nice gains on almost every carry.

Michigan’s rush defense is one of the best in the country but didn’t have the best showing Saturday night. Iowa ran for 164 yards in total on 49 carries, including several big gains on the biggest plays of the game.

Iowa’s Akrum Wadley was shaking Wolverines defenders all game long, racking up 115 yards on 23 carries. But he wasn’t alone. LeShun Daniels Jr. put together some nice runs for big first downs for 54 yards in total.

In the biggest moments of the game, Iowa was able to pick up first downs. It’s a problem Michigan will, obviously, need to correct moving forward.

Michigan’s special teams was a Jekyll and Hyde on Saturday night. It was the biggest part of the game and was from the very start.

Iowa’s punter was the MVP of the first half for the Hawkeyes after Michigan ran into him twice in a row to hand Iowa a free first down. But that wasn’t the biggest bonehead play. That went to Khalid Hill as he coughed up the opening kickoff of the second half; it was a huge momentum killer.

Besides that, Kenny Allen knocked down a 51-yard field goal in the fourth quarter to give Michigan a 13-11 lead. And with Jabrill Peppers not having a big impact in the return game, outside of one nice return, the special teams didn’t have its best day.

Michigan has one of the best coaching staffs in all of football. But that staff didn’t have its best day against Iowa.

Don Brown coached up the defense and had his boys ready to rock at Kinnick. He drew up some fantastic blitzes to give the Hawkeyes fits. But the offense was a different story.

Jedd Fisch and Tim Drevno looked to be overthinking themselves throughout the game. On huge play calls later in the game, they looked to the struggling passing game instead of grinding it out on the ground. It wasn’t the best showing from the talented play-callers.