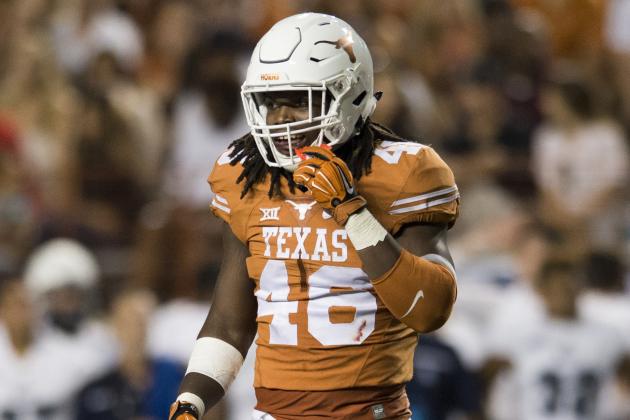 Texas Longhorns linebacker Malik Jefferson suffered a head injury during the first half of Saturday’s game against the West Virginia Mountaineers and was ruled out for the remainder of the Big 12 showdown.

Jefferson Out with Potential Concussion

Jefferson is arguably Texas’ most dynamic defender, so losing him for an extended period could hamper the Longhorns in a significant way.

Entering Saturday’s game against West Virginia, Jefferson was tied for first among all Texas defenders with 55 total tackles and tops with 5.5 sacks.

His seven tackles for loss also ranked No. 2 behind Breckyn Hager.

Although Texas has won two straight, its defense has been sputtering of late. The Longhorns’ one-point win over the Baylor Bears saw them surrender 34 points, and they coughed up 37 points last Saturday in a shootout with the Texas Tech Red Raiders.

So long as Texas is without its best playmaker and pass-rusher, the defense figures to be susceptible to some bigger plays.