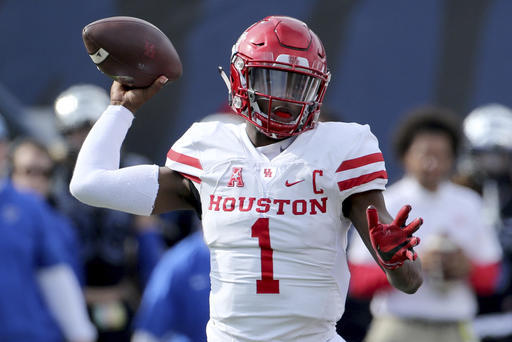 The Houston Cougars covered four of their first times out this season; they then finished by covering just one spread over their last seven games. They also just lost their head coach. So the Cougars will be led by an interim coach when they take on Mountain West champion San Diego State in the 25th playing of the Las Vegas Bowl on Saturday.

Why the San Diego State Aztecs can cover the spread

The Aztecs rode a six-game winning streak to the MWC West Division title, then outlasted Wyoming in the cold up in Laramie 27-24 in the conference championship game. San Diego State spotted the Cowboys the first 10 points of the game, then scored the next 24 to take control. Later, as seven-point favorites, the Aztecs had the spread covered with a 27-17 lead but gave up a Wyoming score with six minutes to go and missed the cash.

San Diego State outrushed the Cowboys 242-95 and won time of possession by a 34/26 margin.

For the season the Aztecs rank seventh in the country in rushing at 273 yards per game and 11th against the run, holding foes to just 112 yards per game on the ground.

Why the Houston Cougars can cover the spread

Houston may be disappointed after its three-loss season and after losing coach Tom Herman to Texas, but it’s still a dangerous outfit. The Cougars had won three games in a row before ending their regular season by losing a thriller at Memphis 48-44.

UH trailed the Tigers 34-17 at the half and rallied to take a 44-41 lead on a Greg Ward touchdown pass to Chance Allen with just over a minute to go, but it lost on a Memphis score in the final 20 seconds. The Cougars actually outgained the Tigers on the day by 69 yards and held a 33/27 advantage in time of possession. They just came up one stop short.

Just prior to that Houston drilled Louisville 36-10, harassing Heisman winner Lamar Jackson into one of his least productive performances of the season.

Last year the Cougars upset Florida State 38-24 in the Peach Bowl, upping their record to 3-1 both SU and ATS over their last four bowls.

Houston began this season with hopes of making the College Football Playoff; instead, the Cougars are playing in the Las Vegas Bowl. Also, betting bowl teams going through coaching changes is often a dangerous proposition. The smart money here on the college football point spreads sides with San Diego State.

San Diego State is 2-6 ATS in its last eight games in December.

The total has gone over in five of San Diego State’s last six games.

Houston is 1-6 ATS in its last seven games.

All college football lines and betting trends courtesy of Bleacher Report’s official odds partner, OddsShark. All quotes gathered firsthand unless otherwise noted. Check out Twitter for injury and line-movement updates and the OddsSharkYouTube page for picks and analysis, or download the free odds tracker app.