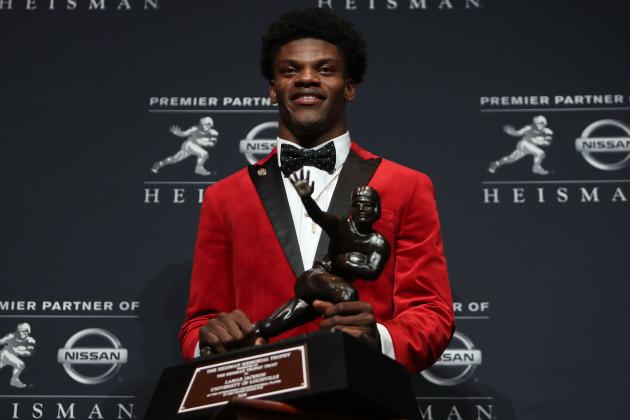 “To the Heisman voters, I’m truly honored and humbled to be the 2016 Heisman Trophy winner,” Jackson said after winning the award, per Chase Goodbread of NFL.com. “To be able to stand up here with all these other Heisman Trophy winners, I’m extremely proud to represent this class and the University of Louisville with their first Heisman Trophy.”

Hands over my key to the city of Louisville.. @Lj_era8 it's yours! Proud of you young GOAT, what a season! #1k

Those numbers put him in rarefied company:

“He surpassed everything I thought he could do,” Louisville head coach Bobby Petrino told Ralph D. Russo of the Associated Press.

He was a special talent and one worthy of the distinction of being a Heisman Trophy winner, as ESPN analyst Kirk Herbstreit told Jones:

The kid is special. He’s just one of those rare talents, and I just love watching him play. I love his competitive spirit. I love how electric he can be in the open field.

I’ve been doing this for a long time, and I just can’t remember – forget quarterbacks – I can’t remember very many players who when they get out in the open field can do some of the things he can do. He’s one of those guys who, I don’t care who Louisville is playing, I need to go watch them. I need to watch him play. I love everything about him.

Heisman voters nailed it this year. Absolutely electric player. & CFB fans must be thrilled to have one more year of Lamar at #Louisville !!

And Jackson’s pursuit of the Heisman Trophy may not yet be complete, as Russo noted:

Lamar Jackson will be the 10th player since Archie Griffin became the only 2-time Heisman winner in 1975 to try to win a 2nd Heisman.

Certainly, Jackson will be the prohibitive favorite heading into his junior season in 2017 to win the Heisman. And given his offensive explosion this past year, it isn’t hard to imagine Jackson joining Archie Griffin as the award’s only two-time winners, especially if Jackson has Louisville in the running for a national championship next year.

Former NFL quarterback Michael Vick certainly thinks the best is yet to come for Jackson:

Late-season losses to Houston and Kentucky kept Louisville out of the running for a championship this season. But with college football’s most exclusive hardware in his possession, Jackson and the Cardinals will now turn to conquering the sport’s ultimate title next season.