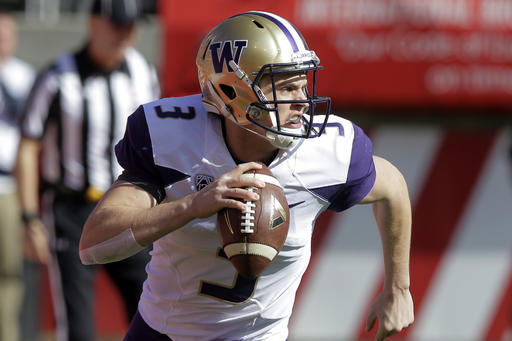 After hitting Baton Rouge to watch Alabama survive a defensive battle against LSU, the ESPN College GameDay crew heads west for an encounter between the No. 4 Washington Huskies and the No. 20 USC Trojans.

The undefeated Huskies have the College Football Playoff on the mind while the team’s high-powered offense continues to cruise through the schedule.

USC, though, presents an expected possible speed bump. After a slow start to the season, the Trojans have rattled off five victories in a row and look ready to throw a wrench in the CFP process.

With the crew of Rece Davis, Lee Corso, Kirk Herbstreit, Desmond Howard, David Pollack and others previewing the game before kickoff later the same night, it’s a day of action anyone with an interest in the national title picture won’t want to miss.

In honor of Veterans Day, the Huskies will be wearing this special uniform Saturday. (via @UW_Football) pic.twitter.com/tTJ0qkaUIy

Watch: ESPN; game is on Fox

Get ready, Washington.
We'll be live from Red Square at 6-9AM PT/9AM-Noon ET.
See you there. pic.twitter.com/0C1OFPPhUa

Other than this being a showcase of quality NFL talent, Saturday’s game features two must-see quarterbacks—who aren’t even eligible to go pro yet.

Washington passer Jake Browning has been downright incredible this year with 34 touchdowns to three interceptions on a ridiculous 202.8 passer rating. In a 66-27 win against California last time out, he almost casually threw six touchdowns while his defense limited the Golden Bears to 362 total yards.

On the other side of the battle line rests USC’s Sam Darnold, who took over as starter during a loss to Utah six games ago. Now he sits on 20 touchdowns to four interceptions and a five-game winning streak. 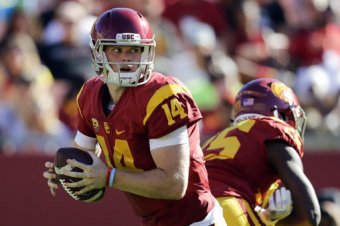 Washington head coach Chris Petersen admitted Darnold will prove quite a challenge to contain, freshman status or not, according to ESPN.com.

Speaking of talent on the outside, top-flight NFL prospect Adoree’ Jackson will need to find a way to shut down Washington wideout John Ross, who has 742 yards and 14 touchdowns. Sidney Jones will need to win one-on-one encounters with USC’s JuJu Smith-Schuster, who has 641 yards and eight scores.

Stats suggest Washington holds an advantage at home, especially when one realizes the Huskies only allow an average of 17.0 points per game, just shy of ranking among the top 10. But it’s never so simple, as many would point to Washington’s perceived weak schedule so far.

Alas, USC has embraced the underdog role for this one, as Lindsey Thiry of the Los Angeles Times captured:

The Washington fight song was blaring on loud speakers throughout most of USC's practice today.

The Trojans can prove they’re back to being the Trojans of old with Darnold under center and keep pace in the Pac-12 South at the same time with an upset.

Washington, on the other hand, can slap away those who suggest the schedule has produced the gaudy stats and rankings thus far by taking care of business against a respectable opponent.

According to Odds Shark, the Huskies rest as 10-point favorites at home Saturday.

Which team will win?

Which team will win?

It’s hard to argue. For as much slack as one can throw at Washington for the schedule so far, USC’s slate over the winning streak hasn’t looked great. The Trojans are also 1-2 on the road this year, losing 27-10 and 31-27 while getting a win against a 2-7 Arizona team.

USC simply doesn’t travel well and asking Darnold to dissect a defense that has held six teams to 21 points or less is too much. Browning, as usual, will have his way up and down the field, especially with his being developed enough to stay away from talented playmakers such as Jackson.

Look for Washington to storm out to a lead and hold it while the Washington defense flusters a freshman quarterback away from the comforts of home.

Stats and information via ESPN.com unless otherwise specified.