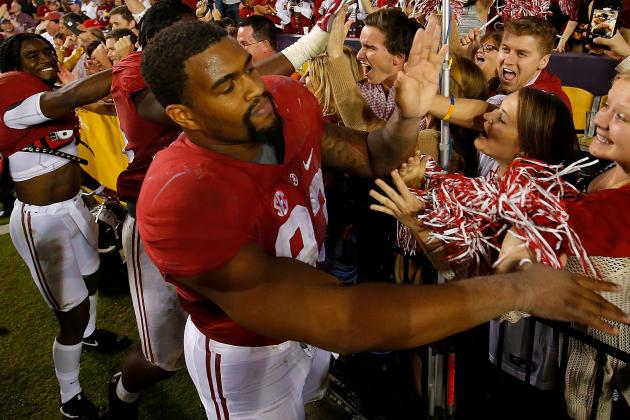 The 2016 SEC season was a bit of a letdown, with the lone exception of the Alabama Crimson Tide.

Head coach Nick Saban‘s crew ran the table with a true freshman quarterback at the helm, notched their third straight SEC title and earned the No. 1 seed in the College Football Playoff.

Every other team had at least four losses, as the conference spun its wheels as Alabama peeled away.

Who was the MVP of each of those SEC teams? Our picks based on statistical production, value and impact are in this slideshow.

While quarterback Jalen Hurts was awesome for Alabama this year, defensive end Jonathan Allen made the transition easier for Hurts and allowed the entire offense to evolve as the season progressed.

He was an absolute monster who was stout against the run, dangerous in pass-rushing situations and kept Alabama’s defense as one of the nation’s best.

The winner of the Bronko Nagurski Trophy and the Chuck Bednarik Award, Allen’s decision to come back to school rather than jump to the NFL last year resulted in one of the best individual seasons in college football his year.

He finished with 56 tackles, 13 for loss, 8.5 sacks, scored on a pick-six and a fumble return, and finished seventh in Heisman Trophy voting.

“I couldn’t imagine my senior season going better than this,” Allen said earlier this month at the College Football Hall of Fame. “Graduating, permanent captain, Nagurski, Bednarik…I don’t even have time to look forward to it all. I’m just blessed.”

Austin Allen stepped in for his brother Brandon as the starting quarterback of the Arkansas Razorbacks and immediately became a star.

The junior threw for 3,152 yards, 23 touchdowns and averaged a whopping 8.5 yards per attempt, leading the Hogs to the Belk Bowl against Virginia Tech.

The once-proud Razorback offensive line went through a rebuilding year this season and gave up whopping 29 sacks—second-most in the conference. The fact that Allen was able to stand tall in the pocket and consistently deliver is a massive compliment to his toughness, work ethic and ability to get the job done even when circumstances aren’t ideal.

Auburn needed an offensive boost after a 1-2 start placed head coach Gus Malzahn squarely on the hot seat, and it got one in the form of massive 240-pound tailback Kamryn Pettway.

The Montgomery, Alabama, native racked up 1,123 rushing yards in just eight games in which he notched 185 carries, scored seven times and helped lead the Tigers to the Sugar Bowl against Oklahoma.

Auburn lost two of its last three due in large part to Pettway’s leg injury suffered late in the win over Vanderbilt. Malzahn hopes that he and quarterback Sean White will be back for the bowl game.

Pettway, a sophomore, established himself as a star in the middle of the season, and should close out the year with a bang against the Sooners.

Florida got decimated by injuries on both sides of the ball, and one that lingered down the stretch was the most important.

Senior linebacker Jarrad Davis came back to school and shined as a senior. Despite missing the final three games of the regular season, Davis finished second on the team in tackles with 60, had six tackles for loss, two sacks, broke up four passes and hurried the quarterback five times.

The Gator defense was loaded with stars, and Davis was the one who made the whole thing tick.

No, Georgia quarterback Jacob Eason didn’t win the Heisman Trophy, lead his team to the playoff or even the division title in his first season in the classic city.

None of that matters, because he laid the groundwork for the future of the Bulldog program under first-year, first-time head coach Kirby Smart.

Eason threw for 2,266 yards and 14 touchdowns with eight picks for the Bulldogs, as he took over the starting role in Week 2 from senior Greyson Lambert. He threw a clutch game-winning touchdown on 4th-and-10 in Week 3 at Missouri in the closing seconds, hit Riley Ridley for 47 yards for a go-ahead score with 10 seconds to play against Tennessee (which Georgia would lose on a Hail Mary) and learned the speed of the game.

That last part is the most important.

Georgia should be better in Smart’s second season, and it now has an experienced quarterback who had a much better true freshman season than Bulldog legend Matt Stafford (seven touchdowns, 13 interceptions).

Kentucky quarterback Stephen Johnson didn’t start the season as the Wildcats’ starting quarterback, but he finished it as one of the conference’s best.

The junior college transfer took over after Drew Barker went down and took the offense to the next level. He threw 12 touchdown passes, ran for two, threw for 1,862 yards and rushed for 278, as head coach Mark Stoops earned his first bowl berth as the front man in Lexington.

He played a huge role in the Wildcats catching fire down the stretch with five wins in their final seven games, and transformed the offense from more of an air-raid attack with Barker to a versatile spread machine that will get even better during bowl practices as the Wildcats prepare for Georgia Tech.

LSU had a roller coaster of a season that saw quarterback Brandon Harris benched in Game 2, head coach Les Miles dismissed after Game 4 and star running back Leonard Fournette struggle through an ankle injury all year.

Thankfully, Derrius Guice was there to be the rock.

The sophomore running back led all qualifying SEC running backs in yards per carry for the second straight season with 7.96, became a trustworthy feature back with 1,249 yards on 157 carries and led the Tigers to a Citrus Bowl showdown against Heisman Trophy winner Lamar Jackson and the Louisville Cardinals.

He also served as the Tigers’ primary kickoff returner where he averaged 17.75 yards per return and had 95 receiving yards, which landed him on the coaches All-SEC team twice.

Derrius Guice on both teams. https://t.co/8UPNf8xB74

Mississippi State entered the year with a quarterback debate, and sophomore Nick Fitzgerald ended that debate by the start of October.

The Richmond Hill, Georgia, native was “Dak Prescott light” for head coach Dan Mullen’s crew, throwing for 21 touchdowns, rushing for 14 more and capping off his first year as the starter with five total touchdowns (three passing, two rushing) and 258 rushing yards in the Egg Bowl win over Ole Miss.

That game produced one of the best postgame answers any head coach has ever had.

When Mullen was asked about who he beat out for Fitzgerald, he sat back with a cigar and said “UT-Chattanooga” with a big smile.

.@rick_cleveland asked Dan Mullen who they had to beat out in recruiting to land Nick Fitzgerald. This was his response & it’s glorious. pic.twitter.com/fFZGJwyVFq

Things changed in 2016, due in large part to the evolution of quarterback Drew Lock from a young freshman thrown into the fire to a sophomore sensation. The Lee’s Summit, Missouri, native threw for an SEC-best 3,399 yards and 23 touchdowns and thrived under first-year offensive coordinator Josh Heupel.

The Tigers did struggle under first-year head coach and former defense coordinator Barry Odom. But the silver lining is that the offense, which isn’t his specialty, seems to be in good hands with Lock at the helm.

Ole Miss stumbled to two straight losses to close out the season and prevent a bowl trip. Part of the reason for that was the absence of quarterback Chad Kelly, who was lost for the year in early November with a knee injury.

Take nothing away from his replacement, true freshman Shea Patterson. He has a bright future ahead of him and he showed that at times this year, including a comeback road win at Texas A&M in his first game. But he wasn’t part of head coach Hugh Freeze’s plan due to the stability that Kelly brought the offense.

Kelly led the conference with 306.4 passing yards per game, tossed 19 touchdowns in nine games, rushed for five scores and kept the Rebels competitive despite an underwhelming offensive line and a defense that forced them to play point-a-minute football virtually every week.

His career didn’t end the way he wanted, but he will go down as one of the best quarterbacks to ever suit up for Ole Miss.

Raise your hand if you knew that Darius English finished tied for third with Auburn’s Carl Lawson and Missouri’s Charles Harris in the SEC in sacks with nine.

That’s exactly what the South Carolina star did in his senior season for the Gamecocks under first-year head coach Will Muschamp.

Breaking news: #Gamecocks have a player on an All-SEC team. Darius English named to second team by the AP.

The man who was first charged with stepping in for former Gamecock star Jadeveon Clowney three years ago finally lived up to the billing in 2016, and helped lead South Carolina to a bowl game in Muschamp’s first season in Columbia.

From the moment Derek Barnett took the field for the Tennessee Volunteers as a freshman in 2014, it was clear that he was different.

Barnett capped off his junior season with an SEC-best 12 sacks and 18 tackles for loss and placed his name alongside Vol legend Reggie White with 32 career sacks.

The Vols defense was a mess at times this year, and never was that more apparent than against Texas A&M when Barnett recognized that a receiver wasn’t accounted for, served as a cornerback and broke up a pass.

Derek Barnett vs TAMU: Recognizes an uncovered receiver & runs step for step. Ridiculous for a dude that size. pic.twitter.com/gpFXIkdWzz

Trevor Knight’s most important work was during the offseason when the former Oklahoma captain was brought in to stabilize a roster rocked by the departure of former stud quarterbacks Kyle Allen and Kyler Murray.

He followed it up with being a pretty darn good quarterback on the field too.

Knight threw for 2,122 yards and 16 touchdowns, rushed for 594 yards and 10 scores and helped lead the Aggies into the Top 10 before an injury took him out of action for the majority of November and derailed the Aggies’ season.

Without Knight, they lost to Mississippi State and Ole Miss during the final month and couldn’t get over the hump against LSU when Knight returned to action at less than 100 percent.

During his junior year, Vanderbilt linebacker Zach Cunningham finally got the attention he deserved.

Vanderbilt’s Zach Cunningham went for that ball like it were a Koopa Troopa 🍄 https://t.co/LZQCQjtaGS

On top of that, he met Georgia’s Isaiah McKenzie just before the first-down marker on 4th-and-short late in Vanderbilt’s win over Georgia, which was a big reason why the Commodores made their first bowl game since 2013.

Cunningham’s strong enough to get upfield in a hurry, and has the quickness to get side-to-side against some of the more exotic offenses in the country. He’s one of the best players at his position, and you saw why in 2016.