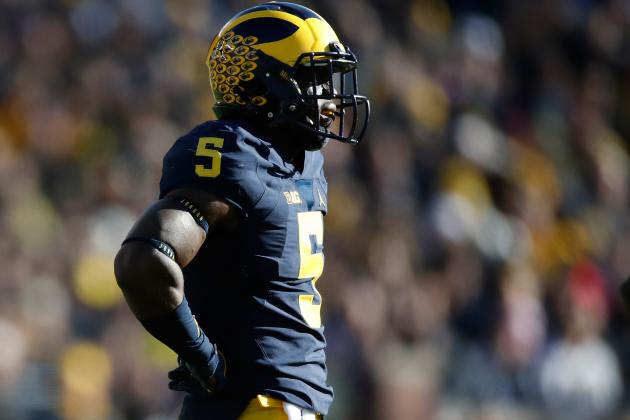 After spending the better part of the last decade as college football’s punching bag, the Big Ten broke out in 2016 and established itself as the best conference in the country—putting four teams in the Top Eight of the final playoff rankings.

Much of that directly correlates with the fantastic head coaching hires that teams around the league have made in recent years. It started in late 2011, when Ohio State brought Urban Meyer home to coach the Buckeyes. It continued when Penn State stole James Franklin away from the SEC, and Michigan made an emphatic return to prominence when it made Jim Harbaugh its head man.

But recruiting played just as important a role, and these 14 players paced their teams during the Big Ten’s banner regular season.

It was a tough first year for new head coach Lovie Smith, but the former NFL head man got the most out of a veteran defensive line.

Dawuane Smoot anchored one side of the line and was tied for fourth in the Big Ten with an impressive 15 tackles for loss. But Illinois’ best player was on the other side, as Carroll Phillips had a dominant season at defensive end.

Carroll was named a first-team All-Big Ten defender by the media after registering 56 total tackles and 20 tackles for loss, which ranked second in the conference and seventh nationally.

He was at his best during the biggest play of Illinois’ season. Leading Michigan State 31-27 and needing a red-zone stop on fourth down, Carroll shed a blocker and came up with a sack to seal the win for the Illini.

Indiana has long been an offense-first program, but the arrival of defensive coordinator Tom Allen in 2016 gave the Hoosiers a new identity on the defensive side.

A big part of that identity was Tegray Scales, the breakout linebacker who was absolutely sensational for a Hoosiers defense that jumped from ranking 121st in yards surrendered last year to 41st this season.

Scales led the Big Ten in total tackles with 117 and tackles for loss with 20.5. He also led not just the Big Ten, but the entire conference with 87 solo tackles.

Iowa couldn’t follow up its 12-0 start and run to the Rose Bowl from a season ago, as an early upset to North Dakota State derailed the Hawkeyes’ championship expectations.

That was through no fault of Desmond King, who proved himself as one of the country’s premier cornerbacks in 2016.

A glance at his stats wouldn’t necessarily support that. He ranked a meager 17th in the conference for interceptions with just two and 19th in passes defended with nine. But those numbers are a direct reflection of how actively opposing quarterbacks ignored his side of the field.

King was named a first-team All-Big Ten defender by both the media and coaches while also earning second-team All-American honors from the AP.

When former Michigan defensive coordinator D.J. Durkin was brought on by Maryland to head its football program last winter, the new head coach’s first priority was identifying a leader for his defense.

That search led him to Jermaine Carter, a junior who was fresh off a 103-tackle sophomore season for the Terrapins.

Durkin built his defense around Carter, and the linebacker responded with a solid season, registering 99 tackles—a mark that was good for ninth in the conference. But more importantly, he came up big when his team needed him the most.

After the Terrapins started the season 5-2, they fell into a four-game losing streak that put their postseason hopes in doubt. Needing a win in the regular season finale against Rutgers, Carter was all over the field, accounting for 15 total tackles and two sacks in a 31-13 victory.

Few players meant more to their team than Jabrill Peppers meant to Michigan.

Jim Harbaugh moved his former safety to linebacker this offseason in an effort to give his defense more athleticism. Peppers did just that, and he paced a unit that ranked second nationally in both scoring and total defense.

The junior defender was incredibly disruptive and ranked fourth in the conference in tackles for loss, but he made an impact in all three phases. He was one of the most dangerous punt returners in the country, ranking first in punt-return yards, and he gave the offense an added spark with 170 total yards and three touchdowns.

That all-around impact made Peppers one of the most versatile football players in the country and was a big reason why he finished fifth in the Heisman Trophy voting.

The 2016 season revealed how reliant the Michigan State program is on an elite quarterback.

Mark Dantonio’s teams are known for their defense, but the Spartans recently produced two high-quality NFL quarterbacks in Kirk Cousins and Connor Cook. But no one stepped up behind center this season, as Tyler O’Connor and Damion Terry struggled greatly.

With the defense taking a big step back as well, the Spartans stumbled to a disastrous 3-9 season.

When the offense struggled, it turned to running back LJ Scott, who at times felt like the only productive player in the Spartans offense. The sophomore running back led the team with 994 rushing yards and six touchdowns, which netted him third-team All-Big Ten honors from the media.

Before the season started, there was an enormous amount of hype around Minnesota quarterback Mitch Leidner, who drew comparisons to Carson Wentz and was tabbed as a potential first-round signal-caller.

But Leidner took an enormous step back in his final season with the Gophers, throwing just seven touchdowns against 12 interceptions in 2016.

Instead, it was running back Rodney Smith who paced the Minnesota offense. The sophomore followed up a solid first year in college with 1,084 rushing yards and 15 touchdowns, just one shy of tying co-league MVP Saquon Barkley.

Smith was also a receiving threat, hauling in 22 receptions for 187 yards.

With six 100-yard rushing games, highlighted by a 24-attempt, 153-yard and three-touchdown performance against Purdue in Week 10, Smith earned third-team All-Big Ten honors from both the media and coaches.

An argument could be made that safety Nathan Gerry was Nebraska’s MVP, but quarterback Tommy Armstrong meant too much to the team’s success in 2016.

A scary concussion against Ohio State and a hamstring injury a week later against Minnesota slowed Armstrong down late in the season, but he was still the engine for a team that went 9-3 and earned a Music City Bowl bid against Tennessee.

Running back Justin Jackson and linebacker Anthony Walker headlined the returning starters for a Northwestern team that was supposed to contend for the West Division title, but the pair took a backseat to a pair of breakout stars in 2016.

There was defensive lineman Ifeadi Odenigbo, who ranked second in the conference and 14th nationally with 10 sacks. But the real star was on the perimeter in senior wideout Austin Carr, who led the conference with 84 receptions, a hair under 100 receiving yards per game and 12 touchdowns.

He was at his best on the biggest stage, when he torched Ohio State’s No. 6-ranked pass defense for eight receptions and a season-high 158 yards.

Those exceptional numbers were good enough to land him first-team All-Big Ten honors and third-team All-American honors from the AP.

Ohio State likely wouldn’t be in the College Football Playoff without the all-around playmaking ability of Curtis Samuel, but it wouldn’t have even been in the conversation without quarterback J.T. Barrett.

The redshirt freshman paced the offense both with his arm and his legs, throwing for 2,428 yards and 24 touchdowns (against just five interceptions) to complement 847 yards and eight touchdowns on the ground. He registered four or more touchdowns in five of Ohio State’s 12 games and overcame double-digit deficits against two top-four scoring defenses (Wisconsin, Michigan) to win in overtime.

His clutch play led the Buckeyes to their second playoff appearance in three seasons and earned him first-team All-Big Ten honors and the Big Ten co-MVP award.

You knew it was going to be a special season for Saquon Barkley when he spent the offseason proving himself as Penn State’s fastest player and setting program lifting records.

Those expectations were met when he ran for 1,302 yards and a Big Ten-best 16 touchdowns during his sophomore campaign. He had a number of huge games, running for four touchdowns against Pitt in Week 2 and breaking the 200-yard rushing mark twice against Maryland and Purdue.

Barkley’s play helped the Nittany Lions establish an explosive identity on offense, which they rode all the way to a Big Ten Championship and a Rose Bowl berth. Barkley was named a first-team All-Big Ten player and earned co-Big Ten MVP honors.

Purdue failed to eclipse the three-win mark for the fourth consecutive season, and with the lack of progression or positive momentum for the program, the university cut ties with head coach Darrell Hazell midway through the year.

The Boilermakers ended the season on a seven-game losing streak, but there were some positives to take away from the 2016 campaign—the biggest of which was the play of DeAngelo Yancey.

The senior made the most of his final season in West Lafayette, hauling in 49 receptions for 951 yards and 10 touchdowns, which ranked second in the conference. But he was a big-play machine, averaging 19.4 yards per reception, which led the league.

The former co-defensive coordinator at Ohio State came in with the intention of overhauling a defense that surrendered an average of 462 yards and nearly 35 points a game in 2015. And while those numbers didn’t change much this season (450.7 yards and 37.5 points), the play of Trevor Morris was one of the few bright spots for the Scarlet Knights.

The sophomore linebacker led the team and ranked fifth in the Big Ten with 102 total tackles, reaching double-digit tackle totals in five games this year.

Wisconsin had one of the fiercest defenses in all of college football this year, and linebacker T.J. Watt was a big reason for that.

The junior came into the season with nothing more than spot duty on his resume. He registered just eight tackles in 2015 after redshirting in 2013 and missing all of 2014 with injury, and he had enormous shoes to fill with the departure of linebacker Joe Schobert.

But Watt, like his older brother J.J. Watt before him, absolutely broke out as a starter, leading the Big Ten and ranking 12th nationally with 10.5 sacks. He earned first-team All-Big Ten honors from the coaches and media and was named a second-team All-American by the AP.