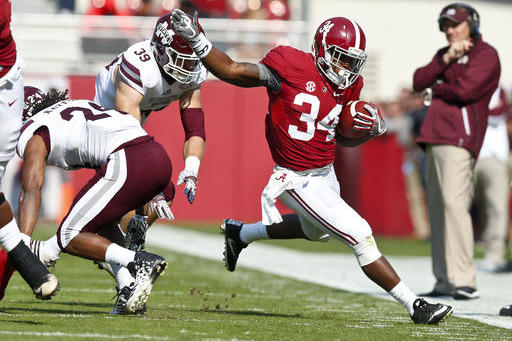 Brynn Anderson/Associated Press
No. 1 Alabama rolled to an easy victory over Mississippi State.

There are few teams as devastating as the Alabama Crimson Tide once that team hits its stride and plays with a full head of steam.

That was the case Saturday for Nick Saban‘s team against Mississippi State. There was some fear that Alabama might be in for a letdown following last week’s hard-fought win over Louisiana State. The Bulldogs, however, simply could not compete with their hosts.

Alabama overpowered Mississippi State early and built a 30-0 halftime lead. The Tide prevailed by a 51-3 margin. While Saban saw all aspects of his offense play a consistent and productive game, this was a remarkable game for freshman quarterback Jalen Hurts (see below). He got the job done as both a passer and a runner.

Wide receiver ArDarius Stewart had a big day for the Tide as he caught eight passes for 156 yards and three touchdowns.

Saban picked up his 40th win as a coach of a top-ranked team, and that tied him with Woody Hayes and Bobby Bowden. Saban’s teams have a 40-5 record when ranked No. 1.

The Alabama defense had another spectacular game, holding the Bulldogs to a third-quarter field goal. Mississippi State quarterback Nick Fitzgerald could not contend with Alabama’s outstanding coverage. He was just 10-of-33 for 145 yards with an interception.

Alabama outgained Mississippi State by a 615-274 margin. The win was the ninth straight in the series for the Crimson Tide.

The No. 2 team in the country, however, did not come through against its unranked opponent. The Clemson Tigers dropped a 43-42 decision to Pittsburgh when Panthers placekicker Chris Blewitt connected on a 48-yard field goal in the final seconds.

Chris Blewitt did NOT blow it!

Pittsburgh received a powerful rushing game from running back James Conner, who carried 20 times for 132 yards and scored a touchdown.

Give credit to Pittsburgh head coach Pat Narduzzi, who had seen Blewitt miss an extra point and have a FG attempt blocked at the end of the first half.

Nevertheless, Narduzzi provided encouragement to his kicker by kissing him on the cheek. The move seemed to remove the pressure on Blewitt.

“I wanted him to know I believed in him,” Narduzzi told Todd McShay of ESPN after the game. “Our guys deserved it.” 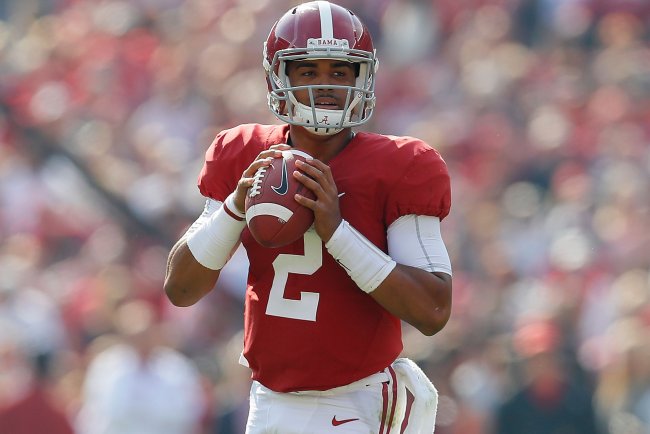 Stars of the Week

The freshman quarterback was magnificent in the Crimson Tide’s blowout win over Mississippi State on Saturday.

Hurts had the best day of his career and one of the greatest statistical performances in Alabama’s long and glorious history. He completed 28 of 37 passes for 347 yards with four touchdowns and one interception.

Jalen Hurts is the first player in Alabama history with 300 yards passing and 100 yards rushing IN THE SAME GAME. ? pic.twitter.com/ernr6eVyl2

Hurts took a seat on the bench in the latter stages of the third quarter when Alabama had put the game away. He yielded his position to backup Cooper Bateman.

The Sooners and their star quarterback may have had some difficult moments earlier in the year. That is no longer the case as the regular season has reached its stretch run.

Oklahoma’s high-powered offense was hitting at full speed in Saturday’s 45-24 victory over Baylor, and Mayfield was razor sharp.

WATCH: Baker Mayfield and Dede Westbrook do it again. #Soonerspic.twitter.com/O1CDwzrVPf

He competed 20 of 25 passes for 300 yards with two touchdowns and one interception. Both of his touchdowns went to explosive wideout Dede Westbrook, who caught four passes for 88 yards in the game.

Mayfield also ran for a touchdown. The Sooners have reeled off seven consecutive victories. 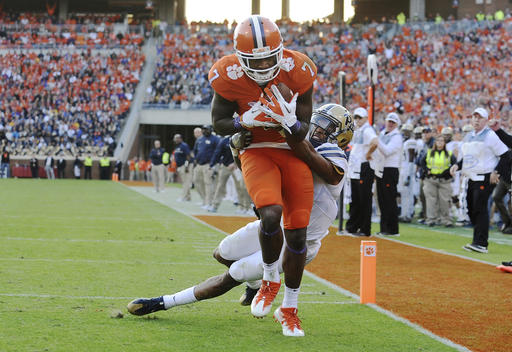 The second-ranked Tigers suffered their shocking home defeat to the Panthers on a late field goal. Nevertheless, it was still a remarkable performance from Williams.

The 6’3″, 225-pound junior wideout dominated throughout the game as he caught 15 passes for 202 yards and a touchdown.

Williams has caught 67 passes for 956 yards and six touchdowns this season. He has been especially hot in his last four games, having caught 39 passes during that span.