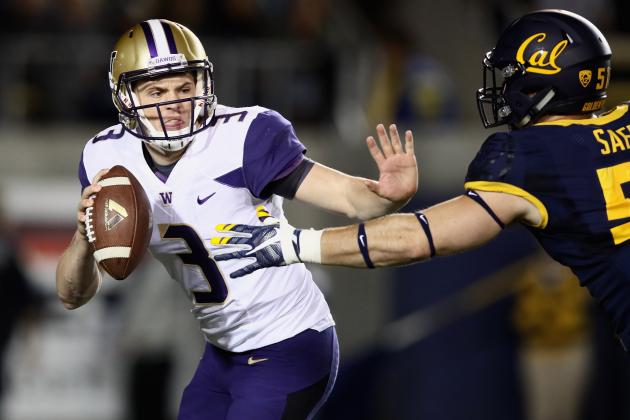 We’re less than a month away from the final College Football Playoff rankings. Once the playoff committee makes its decision on December 4, the elimination run to the national title will be set.

Of course, a lot can happen between now and that final ranking, so even the teams at the top of the current rankings have to be careful. One slip could cost a team like Alabama or Michigan a shot at the championship while also allowing a one-loss team like Ohio State or Louisville to slide into the playoff.

With Week 11 already underway, let’s take a look at those current playoff rankings. We’ll examine the teams ranked in the Top 25 and provide our predictions for the final rankings. We’ll also take a more in-depth look at some teams worth watching as the regular season draws to a close.

The Washington Huskies managed to make their way into the Top Four after Texas A&M suffered its second loss of the season. While the Huskies haven’t navigated the toughest of schedules in 2016, they will have an opportunity to remain in the Top Four by winning out.

What’s been particularly impressive about Washington this season is the team’s dominating offense and the way the Huskies have blown out a large percentage of their opponents. Of course, Washington’s defense—which is holding opponents to just 17.0 points per game—is also stout.

Washington is currently averaging 48.3 points per game. The team has beaten seven different opponents by at least 20 points.

This week brings a tough test for Washington, though. The 20th-ranked USC Trojans may have stumbled early in the season, but they have grown into a talented and formidable opponent.

“I’ll tell you, if you made me choose between playing SC or Washington, I might rather play Washington, to be honest,” one unnamed FBS coordinator said, per ESPN’s Ted Miller (h/t ABC.com). “They both are really good. But if you watch them both warm up and didn’t know anything about them, you’d choose to play Washington. Just pure talent, 11 guys on the field.”

Despite sporting a loss to Penn State, the Ohio State Buckeyes can possibly slide into the playoff if they go undefeated over the remainder of the year. This is because a win in the team’s November 26 matchup with rival Michigan could knock the Wolverines out and allow the Buckeyes to participate in the playoff.

The Michigan game is realistically the one the Buckeyes have to circle. Even if a Top Four team like Washington loses between now and the final rankings, it would be difficult to justify putting a two-loss Buckeyes team into the playoff.

Even if the Buckeyes do win out, there’s a chance the Wolverines manage to stay in the Top Four, which could push Washington out of the mix. A lot will come down to how the playoff committee views the strength of their schedules.

It’s hard not to respect the Buckeyes’ schedule and what the team has accomplished this season. It has won six games by at least 20 points and notched wins against ranked Nebraska, Wisconsin and Oklahoma teams.

Ohio State’s lone loss came at the hands of Penn State, a team that is now ranked at No 10.

Before the Buckeyes can get to their fateful matchup with Michigan, they’ll have to deal with Maryland this week and Michigan State following that.

Louisville is another team that could sneak into the postseason if the right events unfold. The Buckeyes beating Michigan later this month would certainly help, as would a loss along the way by Washington.

For the majority of the season, Louisville has looked as dangerous as any team in the country. Its only loss came against the No. 2 ranked Clemson Tigers—and that game was settled by fewer than seven points.

The problem for Louisville is that the remainder of the schedule doesn’t feature a marquee matchup that is likely to impress committee members. Over the next three weeks, the Cardinals will battle Wake Forest, Houston and Kentucky.

The Houston game looked like it could be a marquee matchup when the Cougars were rolling early in the year. However, losses to Navy and SMU have dropped the team out of the playoff discussion.

Since Clemson is the only team that was ranked at the time it played Louisville, there’s a chance the committee decides to leave the Cardinals out even if teams ahead of them lose.

Unlike the Buckeyes, Louisville has little control over its destiny.