Bowl Games 2016-17: Schedule, TV Info and Predictions for All Games 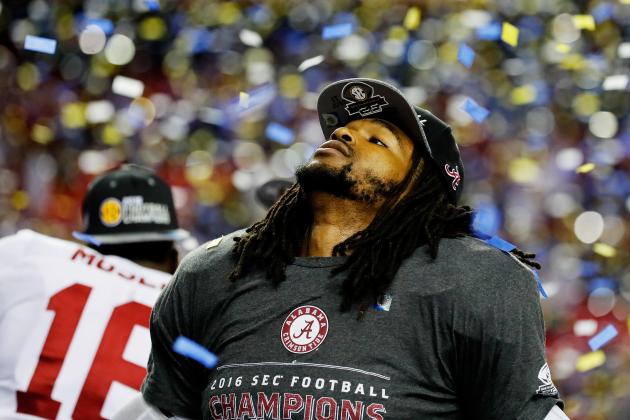 It’s time to pick some college football games, folks. With a full bowl season in front of us, you need a place to find the full schedule, television information, betting lines, predictions and a quick analysis of the top playoff matchups and bowl games to come.

You’ve come to the right place for all of the above.

There are many folks out there who would argue that Michigan is one of the four best teams in the nation. They certainly didn’t have a top-four resume, however, which kept them out of the playoff.

However, Michigan’s physicality and excellent defense will control the game against Florida State.

This will be a close one, because Michigan’s offense isn’t terribly explosive and the Seminoles are tough against the run. But an angry and motivated Michigan team is going to make Florida State pay for the Wolverines’ loss to their rival, Ohio State, to close their season.

Western Michigan has had a fantastic season. They haven’t faced a team with Wisconsin’s talent, however.

Remember, Wisconsin was three touchdowns away from potentially going undefeated in the best conference in college football this season. The Badgers lost by a touchdown in each of their three biggest games this season: against Ohio State, Michigan and Penn State.

Expect them to beat Western Michigan by a few.

Oklahoma comes into this game as one of the hottest teams in college football, having won nine straight games. Auburn opened and closed the season by losing two of three and was still somehow the second-best team in a down SEC this year.

One team is peaking and the other was exposed over the past month by a mediocre Georgia team and the best team in the nation, Alabama. Bet on Oklahoma’s explosive offense to sprint past the Tigers.

If Oklahoma is hot, USC and Penn State are scoring. Outside of the next game on this article, there may not be a better matchup this bowl season than the Trojans and Nittany Lions facing off in the Rose Bowl.

USC has been a different team since Sam Darnold took over at quarterback and is loaded with talent. Remember, this Trojans team manhandled Washington and has a win over Colorado, too.

Would the Trojans be in the playoff if Darnold had started the season at quarterback? Shoulda, woulda, coulda, but USC is explosive.

Penn State, meanwhile, keeps finding ways to win. A blocked field goal against Ohio State late in the fourth quarter? No biggie. A 21-point comeback in the Big Ten title game against Wisconsin? Just another day at the office for these Nittany Lions.

This game is pretty hard to call, but given their play down the stretch, USC looks like the best team to miss out on the playoff outside of Michigan on pure talent and ability alone. Penn State will push them, but the Trojans will sneak away with the win.

Deshaun Watson’s turnovers have kept Clemson on the edge of a razor all season long. He simply can’t afford to be cavalier with the ball against an Ohio State team that is rife with weapons and will make the Tigers pay for any blunders.

But Clemson’s defense has looked shaky at times against good offense and will now have to face a talented Ohio State rushing attack led by quarterback J.T. Barrett, running back Mike Weber and all-around weapon Curtis Samuel.

On the other hand, Clemson’s front four is incredibly talented and could give the Buckeyes offensive line issues. On the other side of the ball, will Ohio State have an answer for Mike Williams?

This one should be tight, but at the end of the day, this is a balanced Ohio State team that beat Oklahoma, Wisconsin and Michigan this year. The Buckeyes have the slightest of edges in talent, Urban Meyer is an excellent big-game coach, and Barrett has protected the ball better than Watson has this year.

Give the Buckeyes the slightest of edges.

C’mon. Of course Alabama is going to win this game.

The Crimson Tide have the most talent in the nation, the best defense by far and an offense clicking under freshman Jalen Hurts.

Anything can happen, and Washington is no pushover, but Alabama is clearly the better team in this matchup.