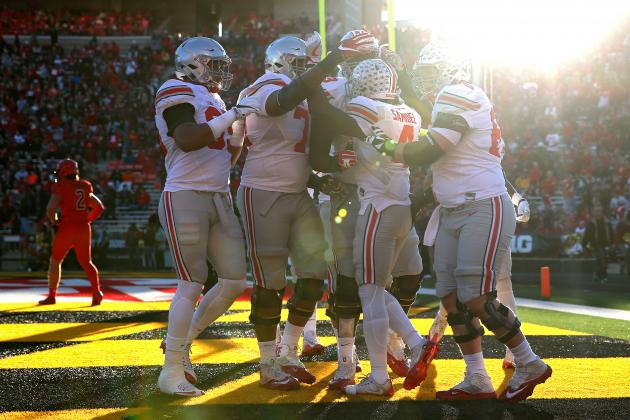 There’s chaos, and then there’s what unfolded during Week 11 of the college football season.

As if the battle for playoff spots wasn’t tense enough, losses by the Michigan Wolverines, Clemson Tigers and Washington Huskies sent the number of postseason possibilities spiraling out of control.

Factor in the Ohio State Buckeyes’ resilient resurgence and another Louisville Cardinals blowout victory, and Associated Press Top 25 voters had plenty to ponder before this week’s rankings were released.

So before we break down where the nation’s best teams stand in advance of Week 12, here’s a look at the latest AP rankings and Bleacher Report’s updated Top 25:

The Buckeyes were perhaps the biggest beneficiaries of Week 11 madness, and their stock is trending in the right direction at the perfect time.

A pair of 62-3 drubbings over the Nebraska Cornhuskers and Maryland Terrapins served as the perfect antidote to combat a loss to Penn State and a shaky win over Northwestern. They’ll have a chance to close the season in emphatic fashion with major implications on the line.

Although the Buckeyes will need to finish 2-0 with wins over Michigan State and Michigan and receive some help in the form of a loss from Penn State if they want to win the Big Ten East, a 2-0 close to the season would put Ohio State in position to nab a College Football Playoff berth regardless.

At that point, the Buckeyes would have wins over Oklahoma, Wisconsin, Nebraska and Michigan.

While a conference title has generally been considered a prerequisite for CFP contention, ESPN’s Greg McElroy thinks OSU may be able to buck the trend:

If Ohio state wins out and is 11-1, they'll be in the CFP. Committee always said they want the "4 BEST TEAMS."

Ohio State’s improved standing comes, in part, as the result of Michigan’s 14-13 loss to the Iowa Hawkeyes.

The Wolverines were a mess on offense in enemy territory, and they were outgained 230-201 in a defensive slugfest that saw quarterback Wilton Speight complete 11 of his 26 passes for 103 yards and an interception.

“We left (points) out on the field and it hurt us,” Speight said, per MLive’s Nick Baumgardner. “The goal was to finish the season undefeated. … But everything is still right there for us.”

If there’s good news for the Wolverines, it’s that they control their destiny with regard to the College Football Playoff and Big Ten East.

Michigan’s two remaining games come against the Buckeyes and Indiana Hoosiers, and wins in both of those contests would allow the Wolverines to clinch a spot in the Big Ten title game.

“We just have to handle our business for the rest of the regular season and let it play out,” Speight said, per Baumgardner. “But it’s all still right there.”

On the flip side, the Huskies have to be worrying just a bit after the USC Trojans upended them on a night when receiver John Ross was the team’s only real spark:

A loss to an improving USC team isn’t a huge knock on their resume, but the problem for the Huskies—as we saw in the initial CFP rankings—is they don’t have enough quality wins to be one-loss locks, even if they win the Pac 12 title.

As things stand, Washington may need to win out, capture a conference championship and get some help if it wants to crash the CFP party.

Finally, we have the Tigers—who are suddenly in a nice spot despite Saturday’s 43-42 loss to the Pittsburgh Panthers.

“The Tigers are now, with Washington and Michigan’s losses, actually in great shape to make the playoff,” Fox Sports’ Aaron Torres wrote. “They control their own destiny in the ACC Atlantic and will be ACC champs if they win out. If Michigan wins out, it will be in the playoff as Big Ten champ, but Ohio State can’t say the same and Washington’s resume wouldn’t compare to the Tigers’ even if they win out.”

With a leg up on the Cardinals thanks to their head-to-head win Oct. 1, the Tigers have the makings of a viable playoff contender a year after their championship hopes were dashed against the Alabama Crimson Tide.