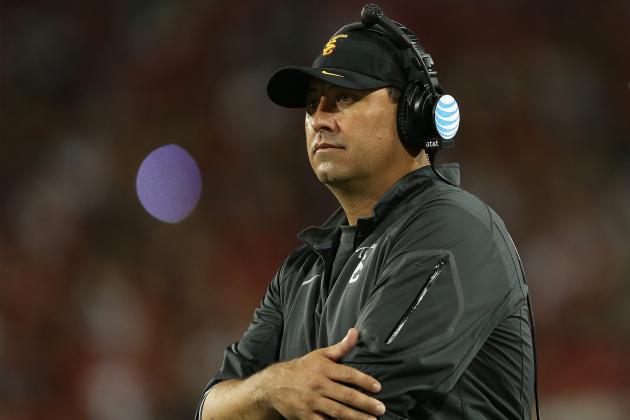 Steve Sarkisian, Mike Locksley and Billy Napier are among the early candidates to fill the void at offensive coordinator at Alabama following the departure of Lane Kiffin.

Chris Low and Brett McMurphy of ESPN.com reported Monday that Kiffin is set to take over as Florida Atlantic’s head coach. Alex Marvez of Sporting News noted the Crimson Tide wouldn’t have retained Kiffin even if he hadn’t gotten the FAU job.

Bruce Feldman of Fox Sports first reported the potential interest in promoting an in-house candidate from the group of Sarkisian, Locksley and Napier.

Kiffin joined the Tide in 2014 following an up-and-down stint as USC’s head coach from 2010 through 2013. He was a finalist for the Broyles Award as the nation’s top assistant coach in his first year in Tuscaloosa, but more recently questions were raised about his relationship with Nick Saban.

In September, Bama’s head coach ripped into Kiffin on the sideline during a game against Western Kentucky. The five-time national champion provided a blunt assessment of the situation afterward, per Alex Scarborough of ESPN.com.

“There are no arguments,” Saban said. “Those are called ass-chewings.”

Yet, in early December, Rainer Sabin of AL.com noted Saban showed support for his offensive coordinator by stating he was ready for another head coaching gig.

Now that Kiffin has reportedly accepted one, Saban can find somebody else to lead the offense whose vision may align more favorably with his own.

With Kiffin going to FAU, there will be a lot of support in the building for Nick Saban to promote receivers coach Billy Napier to OC

The wide receivers coach is in the fourth season of his second stint on the Alabama staff. He previously served as an offensive analyst in 2011 before a short stay as the assistant head coach and quarterbacks coach at Colorado State in 2012.

Sarkisian and Locksley are both offensive analysts for the Tide.

Whether Saban opts for stability with one of those staff members or expands the search, the end game is trying to get the offense into the upper echelon with the perennially dominant defense. The unit leads the country in yards allowed per game (247.8) entering the College Football Playoff.

Meanwhile, the offense ranks 26th in yards per game and 28th in red-zone efficiency. The Tide will need the group to step up if they want to capture a second straight title, given the strength of the other offenses in the Final Four.

Their playoff journey starts with the Peach Bowl semifinal against Washington on New Year’s Eve.