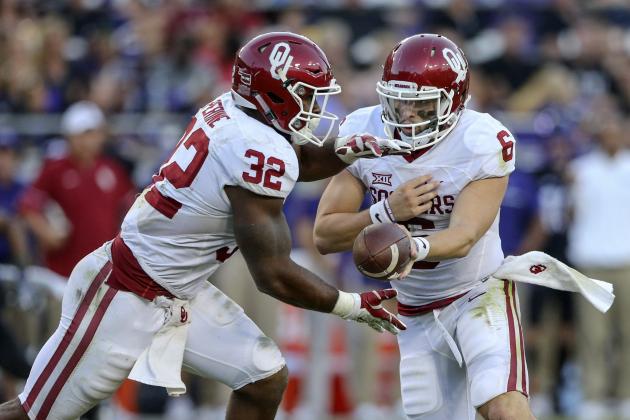 November shapes the results of the college football season, and Week 11 has the potential to stir up some unexpected madness because all 25 ranked teams take the field.

One Top 25 program (North Carolina) has already fallen, and others are looking to avoid a similar fate throughout Saturday’s slate. But sometimes, the favorites actually play like it.

However, a leading—yet unranked—conference contender will not survive the weekend. And elsewhere, one favorable matchup could help a wide receiver put together an enormous stat line.

The predictions are ordered based on when the games are scheduled to kick off. Rankings reflect the College Football Playoff poll.

Mississippi State must be feeling great after knocking off Texas A&M, but a potentially unpleasant trip to Tuscaloosa awaits.

Alabama just posted an impressive shutout at LSU. In the process, though, the team’s 10-game streak of scoring a non-offensive touchdown came to a close. A new one will start on Saturday.

The Bulldogs’ Nick Fitzgerald is a fine player, but he’s not an efficient passer (56.1 completion percentage). Once the Bulldogs are in catch-up mode, they’ll need to rely on the aerial attack. However, an average offensive line won’t be able to handle Alabama’s NFL-bound front seven.

Whether it’s one sack-fumble-touchdown and a pick-six or a combination of the two, the Crimson Tide will score twice on defense.

Oklahoma opened as a 15.5-point favorite, according to Odds Shark, and the consensus spread has climbed to 17.5.

Meanwhile, Baylor is dealing with numerous off-field issues in addition to what we already knew. Leading the list is the program suspending its all-time leading rusher, Shock Linwood, for an attitude problem.

But this team hasn’t made sense all year. Adventurous wins on the road, unimpressive victories at home, then getting destroyed by a TCU offense that looked dreadful in preceding weeks.

The Bears have seemingly played the opposite of what’s expected all season, and they’ll continue the trend by giving Oklahoma a scare in Norman. However, Baker Mayfield will lead a game-winning drive to keep the Sooners undefeated in the Big 12.

Three weeks ago, South Carolina didn’t appear like much of a threat. Among other games, the Gamecocks had lost to Mississippi State and Kentucky while narrowly defeating Vanderbilt and East Carolina.

But then, head coach Will Muschamp burned Jake Bentley’s redshirt. Since then, South Carolina has bested Massachusetts, clipped Tennessee and handled a strong Missouri defense. Bentley threw six touchdowns and zero interceptions in those games.

Muschamp’s team heads to his former stomping grounds for Week 11, and Florida will be without starting quarterback Luke Del Rio.

Despite entering the contest as 11-point underdogs, per Odds Shark, Muschamp and the Gamecocks will celebrate a win in Gainesville.

James Washington is one of the nation’s most explosive receivers. His 19.8-yard average ranks third among players with at least four catches per game and first in the conference.

And now, the senior will challenge a Texas Tech defense that ranks 122nd nationally against the pass.

“He is probably the best deep threat in the Big 12 right now,” safety Keenon Ward said, per Alexa Boutwell of the Daily Toreador.

Oklahoma State quarterback Mason Rudolph always spreads the ball around, but Washington will score a pair of long touchdowns and reach 225 yards in a high-scoring affair.

Yes, Jim Harbaugh, Week 11 will make you and several others smile.

For the first time since the second week of the season, no top-10 team will suffer a loss. (Yes, part of that streak is due to matchups between top-10 schools, but it could’ve been avoided twice.)

We should all root for Team Chaos. But for one brief weekend, the favorites will roll—and help set up a thrilling end to November.