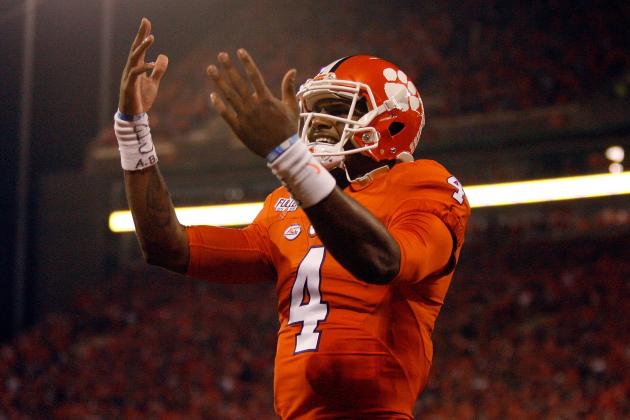 College football bowl season is an exciting time for fans of the sport. For a 17-day stretch—only excluding Sundays—there will always be at least one game to watch.

The unique matchups regularly bring unanticipated results and standout performers, and Bleacher Report is offering up some predictions about developments we expect to see.

But first, two rules: Predictions must be bold yet attainable. Conversely, they must be realistic yet not easy. For example, picking Alabama to win the national championship is realistic, but it’s also a widely held belief.

Feel free to add your predictions in the comments section.

In 2011, Texas-San Antonio kicked off its inaugural campaign. The next season, the Roadrunners officially joined the FBS.

In other words, yes, this is a glorified road game. That will only make a victory even sweeter for the Roadrunners, who are 7.5-point underdogs, according to OddsShark.

New Mexico’s triple-option offense is a burden to contain, but UTSA—which only allowed more than five yards per carry in two games this season—will limit explosive plays and earn a close win.

If your schedule allows it, the Boca Raton Bowl on Dec. 20 should be an entertaining watch. Memphis and Western Kentucky will probably do their best to break the scoreboard.

According to OddsShark, the over/under opened at 77 points. We’re saying the Tigers and Hilltoppers will eclipse the century mark.

In 2016, Memphis twice played a game with 90-plus combined, while Western Kentucky had a pair with 100-plus points.

Michael Gallup is one of the most productive wide receivers most college football fans have never heard of.

Colorado State’s standout target surged late in the season to finish third among Mountain West receivers with 1,164 yards. Gallup tallied five games of 100-plus yards, highlighted by a 213-yard outburst against Air Force. Plus, of his 70 receptions, Gallup caught 11 touchdowns.

And against Idaho—the nation’s No. 112 pass defense—he’s going to explode for a bowl-best receiving performance. No player will register more yards than Gallup.

Gallup and the Rams will take the field Thursday, Dec. 22, in the Famous Idaho Potato Bowl.

Brad Kaaya is all over the record books at Miami, but the junior has constantly fallen short in the fourth quarter.

Kaaya propelled the ‘Canes to a potentially game-tying score opposite Florida State before a blocked extra point shattered their chances of a win. Otherwise, since 2014, the only game-winning drive to Kaaya’s name is after Miami blew a 24-point lead against Nebraska and escaped in overtime.

During the Russell Athletic Bowl against West Virginia, however, he’ll guide the Hurricanes to a last-minute victory.

Kaaya will wrap up 2016—and potentially his college career—with a clutch drive to give The U its first bowl win in a decade.

Injury and team struggles contributed to Christian McCaffrey’s lack of time in the national spotlight, but he still finished the pre-bowl portion of 2016 leading the FBS in all-purpose yards per game.

During the latter half of the season, though, the junior steadily returned to the workhorse role. In four of the last five outings, McCaffrey handled at least 30 touches.

But only once did he accumulate 300-plus all-purpose yards—something the Stanford star achieved six times last season. And the Sun Bowl against North Carolina will be McCaffrey’s final opportunity, as he announced that he will enter the 2017 NFL draft.

The 2016 campaign marks the first time in six years that Air Force, Army and Navy each earned a bowl bid. However, the three service academies have never finished a combined 3-0.

Let’s change that, shall we?

Navy takes on Louisiana Tech in the Armed Forces Bowl, while Army gets North Texas in the Heart of Dallas Bowl and Air Force challenges South Alabama in the Arizona Bowl.

The biggest question is whether a shorthanded Navy team can overcome a high-powered Louisiana Tech offense. But college football’s equalizer is the triple-option. All three will ride it to a win.

Michigan’s run defense swarms to the football, but the primary—and arguably only—weakness is on the edge. There aren’t many running backs better at hitting the sideline than Dalvin Cook.

His four-touchdown performance against Clemson is the perfect example of Cook’s talent. Though the Wolverines have limited nearly all past opponents, none were as shifty or fast as Cook.

However, a couple of long runs and a few explosive gains won’t doom Michigan, which should constantly pressure Deondre Francois.

Jim Harbaugh’s club will need to approach 30 points, but the Wolverines will leave Florida with an orange-filled trophy.

For the second straight year, Florida’s underwhelming season ended in an SEC East Division crown. It was an odd mix of disheartening and commendable thanks to bad offense and superb defense.

And Iowa? Well, 2016 didn’t bring the results the program hoped to attain. However, after falling out of the Big Ten race early in November, the Hawkeyes shined on defense and won three straight.

Inevitably, this idea will come across as a hater’s argument for fans of either team. It shows the weakness of the offenses, yes, but it’s also a testament to both teams being able to overwhelm inferior units.

Unless someone like Akrum Wadley Jr. or Antonio Callaway breaks off a long touchdown, the Outback Bowl will feature more combined punts than the winning school’s final score.

Alabama garnered some extra headlines thanks to a non-offensive touchdown streak that reached double digits. An underrated part was how the Crimson Tide often turned one takeaway into seven points.

Nick Saban‘s club forced at least one turnover in every game this season, but Alabama managed a single takeaway six times and only topped two twice. Meanwhile, Washington committed just 12 turnovers all year, boasting an FBS-best plus-21 margin.

But desperation causes trends to find an outlier.

If Washington is playing from behind—and as 17-point underdogs, per OddsShark, that’s likely—Jake Browning and Co. will start forcing plays in an ill-fated comeback effort.

Deshaun Watson finished second in Heisman Trophy voting, but Clemson’s quarterback had an interception problem in 2016.

There were only four games all season in which Watson didn’t throw a pick, and the margins of victory were 59, 46, 54 and 22. He ended the pre-bowl slate with 15 interceptions—13 of which came in games decided by seven points or less.

But Watson will have a memorable night in the Fiesta Bowl.

Playing opposite Ohio State, which has snatched 19 picks this season, Watson will avoid an interception altogether and lead the Tigers to a second straight appearance in the national championship.